Binaca Geetmala is Famous Program of 50s and 60s 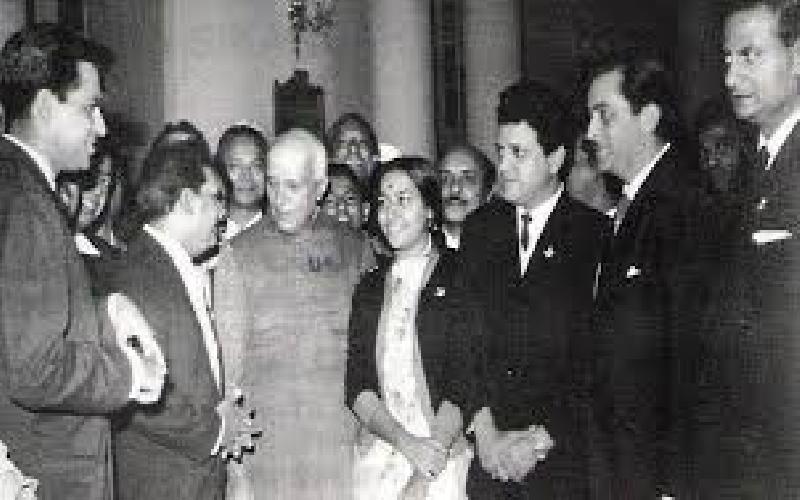 Music of Shankar Jaikishan in Shree 420 and Naushad Ali in Uran Khatola dominated the Binaca Geetmala of 1955. The music of film Nagin, Nastik also came in the first 7 super hit songs. Good music was loved by the audience.

In the 1950s and 1960s, when Television did not come in India, listeners devoted time to listen to the radio. In All India Radio, Binaca Geetmala was a very famous program which played the biggest hit songs of super hit films of that period.

In 1955, the biggest super hit song was “Mera juta hai japani, yeh patloon Englishtani”. It was sung by Mukeshji for Raj Kapoor in his blockbuster film Shree 420 in 1955. The lyrics were written by Shailendraji and music was composed by Shankar Jaikishan. Raj Kapoor films always had a social message and Shree 420 promoted truth, honesty and criticized dishonesty in public life. It was a golden jubilee hit film and became popular in Russia and Eastern Europe.

It was sung by Lataji in the film Uran Khatola. Dilip Kumar and Nimmi played the lead roles. It was a super hit film with music of Naushad Ali. The lyrics were written by Shakeel Badayani.

In 1955, the 3rd biggest super hit song was “man dole mera tan dole” sung by Lataji. It was from film Nagin. Although Nagin was released in 1954, the film’s music ran all across 1955 as well. Vaijayantimalaji stormed to stardom with Nagin. Pradeep Kumar film demolished all the hit films of 1954, including the films of Dilip Kumar and Raj Kapoor to reach at the top. Hemanta Mukherjee’ music really became a phenomenon.

In 1955, the 4th biggest super hit song was “chale aaj tum jaha se, o dur ke musafir humko bhi saath le le re”. It was a song of the century of Rafisahab. It was from Dilip Kumar Nimmi starrer super hit film Uran Khatola. Naushad Ali composed the music of the film. In the last scene, Dilip Kumar and Nimmiji committed suicide as society never wanted their marriage. Dilip Kumar was called tragedy king and the story of the film suited Yusuf Sahab a lot.

In 1955, the 5th biggest super hit song was “ichak dana bichak dana” from film Shree 420. It was sung by Lataji. Nargisji was teaching primary school students in the film and the song was designed to teach letters to the small children. All the songs of Shree 420 became super hit. The credit goes to Shankar Jaikishan, Shailendraji and team of Raj Kapoor.

In 1955, the 6th biggest super hit song was “dekh tere sansar ki haalat kya ho gayi bhagwan”. It was sung by Kavi Pradeep. It was from Ajit film Nastik. The music was composed by C Ramchandran. The poetry was written by Kavi Pradeep himself. It was a song with a strong social message.

In 1955, the 7th biggest super hit song was “mera dil yeh pukare aaja”. It was sung by Lataji. As mentioned earlier, Nagin was released in 1954. But the song swayed the country. In fact music director Hemanta Mukherjee or Hemant Kumar received filmfare award for best music director only once and that was in Nagin. The pair of Pradeep Kumar and Vaijayantimala stormed Bollywood.

There were other hit songs of that year also like “udhar tum haseen ho, idhar dil jawan hai” sung by Rafisahab and Geetaji in the film Mrs and Mrs 55. It came at No 16. Guru Dutt was the producer, director and actor of the film.

There were many directors who were making meaningful films. In addition to Raj Kapoor, Guru Dutt, the other directors who dominated the mid-1950s included Bimal Roy, BR Chopra, V Shantaram, Mehboob Khan, to name a few.

There were many music directors in the arena. While the main competition was between Naushad Ali and Shankar Jaikishan, the other composers who made innovative music included OP Nayyar, Roshanlal Nagrath, C Ramchandran, Madanmohan Kohli, Ghulam Mohammad and others.

Among singers there were a very big list. Among male singers Rafisahab, Talatji and Mukeshji dominated playback singing. Manna Dey Sahab, Hemant Kumar were also at their best. Among female singers it was a contest between Lataji, Geeta Duttji, Shamshad Begum, Sudha Malhotra, Suman Kalyanpur, Suraiyaji and others.

1955 had 3 brilliant films released whose songs did not become grand hit. One was Seema. Balraj Sahani and Nutan played the lead roles. The music was composed by Shankar Jaikishan. The songs “tu pyar ka sagar hai” sung by Manna Dey and Rafisahab’s song “kaha ja rahe ho” had huge musical quality. Both the songs should have been in the first 10 songs of that year.

List of Best Bollywood Movies of 60s and 70s

TAGS : Dilip Kumar Raj Kapoor Binaca Geetmala 50s 60s Shankar Jaikishan Uran Khatola Naushad Ali Shree 420 music of 60s
Let us know how you like this article. Like it and Rate it below.
1.32K 3
1
Thanks for rating this article
5 stars - by 1 user(s)

Role Of Bollywood In Documenting Contemporary Social Re

Even though Bollywood movies are tales of fiction, the social realities that form the background of such fictional tales are often very close to reality. They include social challenges that exist and motivate movies centered on them as also the manner in which the social aspirations and complexities evolve.