How Bollywood Transcends the Boundaries of Religion and Communities? 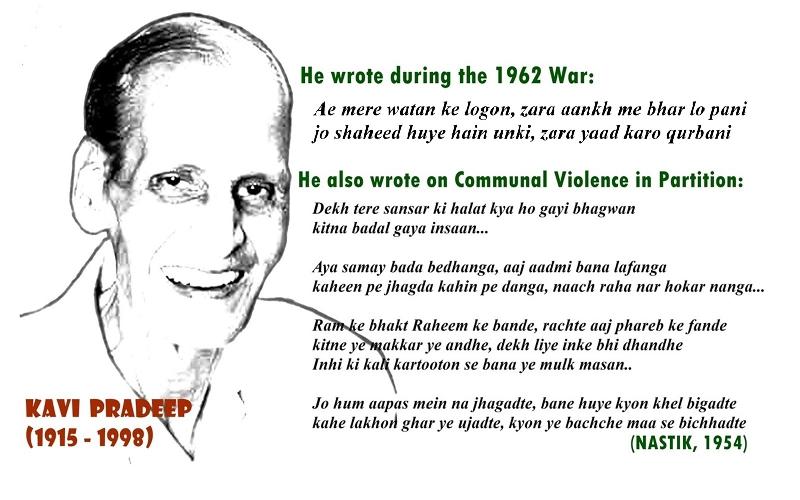 Movies today occupy the same space and importance that was once reserved for the written word. Bollywood movies, which are often criticized for their obsession with love stories and song dance sequences, stand out for holding on to the supreme ideals of humanity, reason and empathy, and for not getting blown out in the communal and political divisions threatening the Indian social space.

The human history of twentieth century is heavily marred and stained by communal divisions, violence and sufferings that had often something to do with race, religion or politics. The first half of the twentieth century witnessed two unprecedented World Wars and was at the brink of a third one during the second half. It was also a witness to some of the worst inhuman mass killings in Europe, Asia and Africa across several countries, putting humanity as a whole to shame. During these troubled times, neither literature nor popular arts remained uninfluenced.

India also had its own shares of such inhuman madness, particularly in the form of communal violence during the partition of India, which left deep scars and damaged on the social psyche. There were also wars that were thrust on India, and finally there was the lack shadow of terrorism and innocent deaths. For a poor developing country just out of colonial dominance, in many ways these were all a perfect ground for jingoism and hijack of entertain industry in favor or more communal and more nationalistic ideologies.

It is in this background that Hindi movies of Bollywood stand out for retaining their balanced depiction of such evil, sticking to the vibes of reason and wisdom and being empathetic and understanding towards the human elements that were misguided to join the unethical forces in these episodes of violence.

Bollywood songs too did their best in highlighting the humane approaches to these complex socio-political issues.

Role of Bollywood Movies in Strengthening Communal and Social Harmony

Bollywood was emerging into a mainstream of popular entertainment of the masses when Indian was partitioned. With millions affected, displaced, looted or killed across both sides of the new border, the Bollywood was still able to retain its sanity and advocate the same through its creations, a feat for which it has never been given adequate credit. In spite of the mob violence, and though the Bollywood industry itself was partitioned, most movies retained their humanitarian attitude and in spite of very high communal tensions, were unapologetic in criticizing this madness.

One can remember the 1954 movie NASTIK, which revolves around a character (played by Ajit) who loses faith in the God and the system after his family had to suffer badly in the violence of partition, only to regain it at the end. Kavi Pradeep’s song, Dekh tere sansar ki halat kya ho gayi Bhagwan, kitna badal gaya insan… strongly brings out the criticism against all those putting fuel in the communal fire and calls it complete madness. Kavi Pradeep, one of most prolific lyricists of Bollywood in the earlier decades, also wrote Ae mere watan ke logon, zara aankh mein bhar lo pani… paying tributes to the brave soldiers of India fighting the 1962 war. These two songs that he wrote reflect the great balance maintained by Bollywood between real patriotism and need to maintain human sanity in the face of grave provocations.

1950s were probably the best years of Bollywood from several perspectives. As a new generation of Indians that had actively struggled and suffered for freeing their country from foreign dominance in the past decades now freely explored a new world where they were free and as yet, uncorrupted, their confidence, creativity and ideals reached a peak that may have slid afterwards. Their highly ideological attitude was angered by the tenuous struggles against difficult and draining realities, but was not damaged by it. It was these years of Bollywood, which gave rise to the ideological hero, who struggled to overcome his own limitations and weaknesses and finally rose above himself, stereotyped by the vagabond in AWARA (1951) and SHRI 420 (1955).

One of the striking features of Bollywood movies of post independent India was the glorification of humanity, and condemnation of communalism, a great feat given the recent events of that time. Perhaps, one of the best depictions of this came in the song from the 1959 movie, Dhool ka Phool, Tu hindu banega na mussalman banega, insaan ki aulad hai insaan banega, written by Sahir Ludhianwi.

A Balanced View of Wars

Wars between nations are typically highly tragic events, but also give rise to very strong nationalistic fevers among the masses. India suffered from three major wars thrust on it during the sixties and the seventies, and while the whole nation joined hands to support the armed forces in every possible way, Bollywood also glorified the patriotic sacrifice of our brave soldiers in movies like HAQEEQAT (1964). However, even while glorifying patriotism, Bollywood did not fail to point out the overall futility of wars as a mutually destructive event. One of the best war movies made in recent decades was BORDER (1997) with some splendid songs that are still popular today.

The strength of songs of Border lies in their ability to depict patriotism without sacrificing human consideration that must always condemn war. The last song of the movie, Mere dushman mer bhai mere humsaye… is one of the greatest depiction of the damages and destruction of war and its futility, and how it plays havocs with the lives of brave men and their patriotic families on both sides of the border. Indeed, wars are often initiated by political interests who have little respect for human life, including that of their own citizens or soldiers. At times, these lives are mercilessly crucified in wars as a scapegoat for the protection of their political positions and vested interests.

Humane Depiction of Terrorists – A Rarity in the History of Cinema

It is generally difficult to find examples of humane depiction of Germans in the Hollywood movies of the forties, of Russians in the spy movies of seventies and eighties or of Islamic terrorists in the 21st century Hollywood movies. Their stereotyped depiction as consistently evil can at times look like a one sided over simplified story. India has also faced terrorism from several quarters since the nineteen eighties and in spite of its limited capabilities, it would not be wrong to say that it has been able to handle it with great restraint in use of forces, thereby minimizing collateral damage to innocent victims.

In comparison to some of the other movie industries across the world, which boast of greater finesse, technology and objectivity, Bollywood stands out for its ability to even treat the much despised terrorists with certain degree of humanity. Gulzar’s MACHIS (1996) that narrates the story of certain misguided youth through the troubled period of terrorism in Punjab not only portray a complex issue with a lot of understanding, but is also able to bring out the victory of human considerations over everything else in the end. The ability of such movies to empathize simultaneously with both sides in a virtual war can always be a great contribution in slowing down the flames of hatred and allow the comforting breeze of reason and wisdom settle in to douse those flames.

While most people connect Bollywood with only melodramatic love stories and dance and music, it is time we also give credit to it, where it is due. Its role in transcending the boundaries of religion and politics, for instance, and its ability to retain the supremacy of humane considerations even in the face of popular jingoism, make it stand out!

TAGS : hindi cinema hindi music music and politics music and partition of Indian religion and music religious violence and music Bollywood movies on war Movies on terrorism terrorists in movies Bollywood and social harmony
Let us know how you like this article. Like it and Rate it below.
162 0
0
Thanks for rating this article
0 stars - by 0 user(s)

Hindi films are known for their variety of songs. This article brings to life the best melodic Bollywood songs from various decades.

While saying farewell to someone you know does make you feel emotional, farewell parties are actually a whole lot fun. When Bollywood music is playing at farewell parties the vibe is at another level.