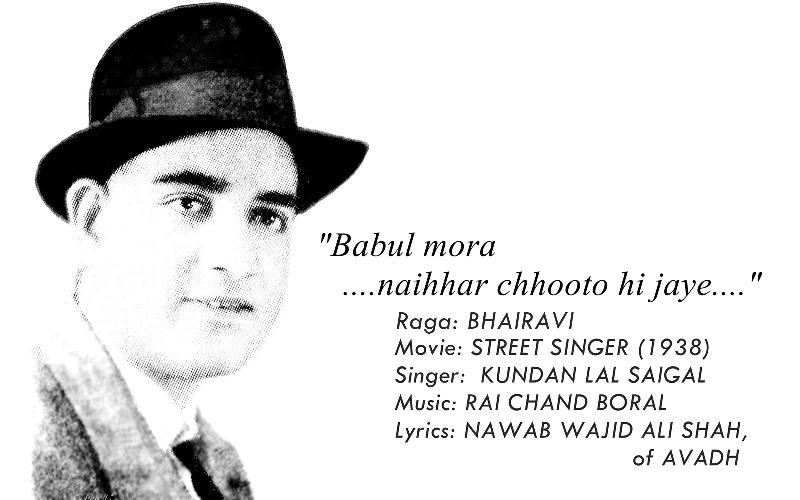 The first great song of Bollywood which had its music composed on the basis of Hindustani classical music was sung by one who never had any formal training in classical music. Interestingly, this song was written by an erstwhile King of Avadh in nineteenth century, and was recorded live on the sets. Its success made the singer actor the first superstar of Bollywood.

If we go through a chronological history of Bollywood songs, it is not difficult to observe how the songs of thirties and early forties differ in quality from those of late forties and subsequent decades. One of the main differences between them was the increasing use of Hindustani classical music for composing music, which became popular in fifties, making it a golden era of songs based on classical music. Movies like Baiju Bawara (1952) and Basant Bahar (1956) are a testimony to it.

Bollywood songs are not classical music in the true sense. In fact they would be considered even flouting semi-classical tradition in the eyes of the purists. But Bollywood music, unlike the classical one, is not for the strictest purists or a few connoisseurs and masters of classical tradition. It is for the ordinary masses.

Thus, songs based on classical music and catering to the tastes of the audiences are what one refers to as Classical songs of Bollywood.

Classical Music can be credited for giving to Bollywood music its popularity, longevity and greatness. It reached its zenith in the fifties, and continued till the early eighties even as composers experimented with various styles, fusions and orchestration and thereby innovated and developed new genres on its rich base. However, songs based on Hindustani classical music were also made earlier.

Interestingly, the song that can be credited as having ushered this Era of Hindustani Classical Music in Bollywood was sung by one, who never formally received any formal training in classical music!

Origin of Songs & Music in Bollywood

Sound came to Bollywood in 1931 with Alam Ara. What followed soon after was a flood of songs and music. While Alam Ara had only seven songs, Shirheen Farhad, which was released a little later, had 42 of them. The cake, however, needs to go to Indra Sabha, which had 69 songs. The age of the musical arrived in Bollywood along with sound, and has stayed put ever since.

Most of the earlier Bollywood movies had songs that were sung by the actors themselves. A few years after the advent of sound, playback recording also begin to get popularized, primarily out of convenience, as recording a song at the scene of enactment was often an imposing challenge for everyone. Yet, there was a singer-actor who insisted on recording his songs live. His name was Kundan Lal Saigal, a singer who joined the movie industry to become an actor-singer and went on to become its first superstar.

K L Saigal: One of the Greatest Classical Singers of Bollywood

Saigal, son of a Tehsildar, used to sing while accompanying her mother in religious congregations, and learn music from the common folk and natural sounds, while accompanying his father during his official tours to remote hamlets. He already had a few songs recorded commercially before he arrived in Hindi movies. Once there, his unique talent made him an inseparable part of Bollywood. He was not trained formally in classical music, yet, there have been few singers who have gained greater popularity singing classical based songs.

Saigal is often credited as the first superstar of Bollywood, mainly due to his singing abilities, which used to matter more those days. Most great singers after him, including Mohammad Rafi, Kishore Kumar and Lata Mangeshkar drew immense inspiration from him and were his great fans. Lata Mageshkar has described how she bought her first Radio in 1947, a rather expensive thing those days, with the hope of listening to Saigal’s songs and even singing with him one day. But the same day, when she heard the news of Saigal’s demise from that set, she discarded the same.

During the shooting of the movie Street Singer, which was released in 1938, Saigal insisted that the song be recorded live, with orchestra also moving along with the singer-actor, while he sings the song, and so it was done. The song, “Babul Mora…”, thus became an interesting milestone from many aspects. It is a great piece of Raga Bhairavi, a tune of Hindustani Classical music, and is pretty close to maintaining the integrity of its classical characteristics.

Babul Mora… is an interesting song in several aspects. It was written by Nawab Wajid Ali Shah, a ruler of nineteenth century Kingdom of Avadh, when he was defeated by the British during the 1857 war, and sent into exile. The song expresses his sentiments on being exiled from his palace and kingdom. Thus, the lyrics of the song have a rich history and depth of emotions, which one can feel while listening to it.

Babul mora… is also one of the first great songs in Raga Bhairavi, which has been the most commonly used raga during the history of Bollywood, and can be credited with more great gems than any other raga. In particular, Saigal himself has rendered many melodious songs in the same raga, making him one of the greatest singers of this raga. The fact that he did not receive any formal training in classical music appears incredible, when one hears the quality of his renditions. His acumen as singer of classical based songs remains unsurpassed even today, in spite of many great singers, who have regaled Bollywood since his time.

This song, composed by Rai Chand Boral, can rightfully be credited as being the song that ushered in the era of classical based songs in Bollywood, so unbridled has been its appeal and popularity over the three quarters of a century since it was recorded in a live acting – singing performance on the sets by the first superstar of Bollywood!

The 80s and 90s were awe inspiring decades for romanticism and lyrics in various genres. Dwell in an epic list of rock love songs from that unforgettable era.

What Makes Bollywood Songs So Popular?

Bollywood songs are neither traditional classical music nor the best form of popular folk or Western music. They are not even a pure genre of music with any real tradition or accumulated perfection that characterizes most other forms of music genres.