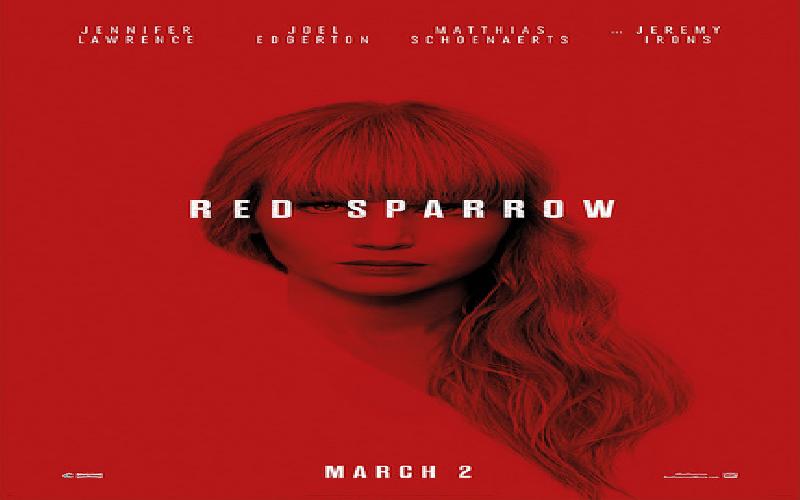 Red Sparrow is a spy thriller based on a novel of the same name by Jason Matthews. It stars Jennifer Lawrence, Joel Edgerton, Matthias Schoenaerts, Ciaran Hinds and Jeremy Irons. Here’s a short review of Red Sparrow.

After watching the trailer of Red Sparrow, I have absolutely no clue as to how the actual movie is going to be like. All I know is that Jennifer Lawrence’s character could be a spy. I decided to watch Red Sparrow anyway because I’ve always loved watching spy thrillers and because Jennifer Lawrence is in it.

I’m sure based on her reputation alone as a double Oscar winner that Red Sparrow is a movie worthy of me spending two hours in the cinema. I was not wrong. I came out very satisfied with the ending of the movie and trying not to spoil anything, here is my review of Red Sparrow.

Red Sparrow is a movie based on a 2013 novel of the same name by Jason Matthews. The main character, Dominika Egorova played by Jennifer Lawrence is a ballerina whose career is cut short after she breaks her leg while dancing on stage.

She is then recruited by her uncle, the First Deputy Director of the SVR (Russia’s spy agency the equivalent of America’s CIA), Ivan (Vanya) Dimitrevich Egorov played by Belgian actor, Matthias Schoenaerts (The Danish Girl) to become a Russian spy. Uncertain of her future and feeling very concerned for her sickly mother, she accepts the offer.

Dominika is then sent for training and becomes one of the most dangerous spies Russia has ever produced. Her first assignment is to get close to an American spy, Nathaniel Nash, played by Australian actor Joel Edgerton (Gringo, It Comes at Night) and to extract information from him. Thus begins the cat and mouse game.

Cast and crew of Red Sparrow

Red Sparrow is directed by Francis Lawrence (no relation to Jennifer Lawrence) though they had worked together before in the movies The Hunger Games : Catching Fire and The Hunger Games : Mockingjay Part 1 and 2. Red Sparrow also stars Charlotte Rampling, Mary-Louise Parker, Ciaran Hinds and Oscar winner Jeremy Irons.

Red Sparrow is said to be Jennifer Lawrence’s last movie after which she will take a year’s hiatus to devote herself to an organisation that promotes political awareness among the American young people.

There are many interesting and challenging scenes in Red Sparrow. Firstly, the fact that Jennifer Lawrence plays a ballerina will definitely require her to dance the ballet; not just any dance but ballet which takes some dancers years to master. It was challenging to make the audience believe that it was Jennifer Lawrence who was dancing. Secondly, there were a few scenes where Jennifer Lawrence had to strip naked and almost naked. That must have been quite a challenge for her to be in her birthday suit.

I must say that throughout the movie, I had been guessing how it will end but all my guesses miss the mark. Maybe I’m just not good at guessing or perhaps the plot is so well executed that I missed the mark. This is one movie I highly recommend if you like spy thrillers.

TAGS : movie review of Red Sparrow Jennifer Lawrence based on a novel Jason Matthews spy thrillers Joel Edgerton
Let us know how you like this article. Like it and Rate it below.
108 0
0
Thanks for rating this article
0 stars - by 0 user(s)

Ballads speak a colloquial language of the heart. The passion and sentiments expressed in rock ballads and power ballads is like no other.

The 70s and 80s were decades that became trend setters for Hindi films. Song and dance in films changed dramatically in these colorful decades.