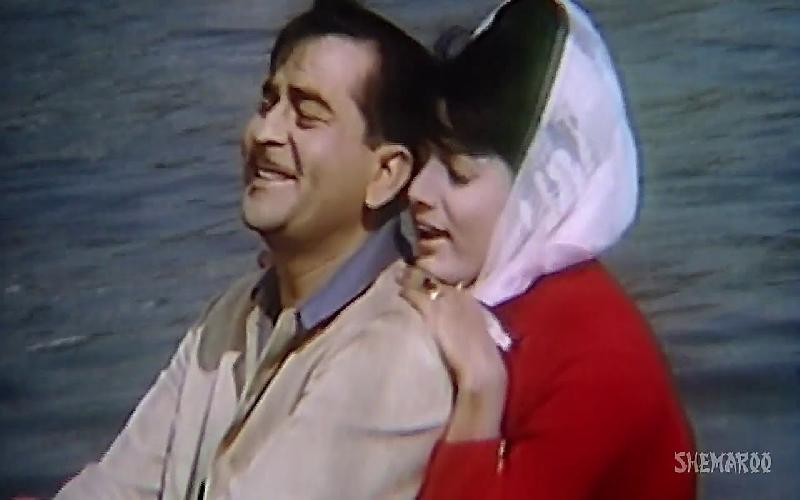 Image Source - This image is taken from https://www.youtube.com/watch?v=2GFHsIxC3-c

Whenever Rafisahab sang any song in Raj Kapoor's film it became grand hit. Rafisahab adjusted his voice for rendering songs for Raj Kapoor as hero and he did absolute justice to the songs.

As majority of Raj Kapoor’s songs were sung by Mukeshji and Manna Deysahab, the combination of Rafisahab with Raj Kapoor went unnoticed. As Raj Kapoor himself understood music, and his main composer Shankar Jaikishan had great fascination for Rafisahab, it was obvious that Rafisahab was required in certain songs in his films.

- In the film Andaz in 1949, while Naushad Ali used Mukeshji for Dilip Kumar songs, he used Rafisahab in the song “yun to aapas me bigadte hai” for Raj Kapoor. Andaz was the 2nd biggest blockbuster in 1949 after Raj Kapoor’s Barsaat.

- After Naushad Ali, Ghulam Mohammad was the first music director who gave all the songs of film Amber to Rafisahab. Amber was released in 1952 where Raj Kapoor and Nargis played the lead roles.

- In Shree 420, although Rafisahab did not sing for Raj Kapoor, there was a duet song “ramaiya vasta maiya” which Rafisahab started, it was then sung by Lataji and finally Mukeshji. Rafisahab sang songs for Bhagwan  titled “sawa lakh ki lottery” and Johny Walker titled “all line clear” Raj Kapoor starrer Chori Chori in 1956. The music was composed by Shankar Jaikishan.

- In Raj Kapoor’s Mai Nashe Me Hoon released in 1959 there was a brilliant song of Rafisahab titled “lo khoon se khoon juda hua, mushkil se jo mil na paya”. The song was picturized on Nazir Hussain who played the grandfather of Raj Kapoor in the film. It was composed by Shankar Jaikishan. Although it was not picturized on Raj Kapoor, the song was the theme song for the film and was played at different times of the film.

- In Raj Kapoor’s Chalia in 1960, Rafisahab sang the song “gali gali sita roye, aaj mere desh me”. It was composed by Kalyanji Anandji. Nutan acted opposite Raj Kapoor in the film.

- In Raj Kapoor’s film Nazrana in 1961, Rafisahab’s song “baazi kisi ne pyar ki” was majestic. Ravi Shankar Sharma composed the music and it was played when Raj Kapoor left his son at the marriage of Vaijayantimala and Gemini Ganeshan.

- Rafisahab sang the song “tum hi tum ho is jeevan me, pyar hi pyar ho jaise chaman me” in Raj Kapoor’s film Ek Dil Sau Afsane in 1963. It was composed by Shankar Jaikishan. It was a duet song and Lata Mangeshkar sang the song for Wahida Rehman along with Rafisahab.

- In Raj Kapoor’s Sangam released in 1964, Rafisahab sang the landmark song “ki tum naraaz nahi hona” which was played twice in the film, especially after death of Rajender Kumar in the film. It was composed by Shankar Jaikishan and at the end of the film it was played at the background, so it was not picturized on Raj Kapoor. It became the biggest hit of all the songs of Sangam.

- In Raj Kapoor’s Around The World in 1967, Rafisahab sang 2 songs for Mehmood and Om Prakash, “ayo ate kyun nahi” and “cowa chale hanski chal”. But the songs were not picturized on Raj Kapoor. They were composed by Shankar Jaikishan.

TAGS : Raj Kapoor Rafisahab Ghulam Mohammad Shankar Jaikishan OP Nayyar Naushad Ali
Let us know how you like this article. Like it and Rate it below.
1.18K 1
0
Thanks for rating this article
0 stars - by 0 user(s)

A diverse range of emotions are portrayed through songs in Hindi films. Here’s an epic list of the best emotional Bollywood songs..

The pure nostalgia of dancing to the tunes of classic old dance songs at weddings is like no other. The dance floor at weddings comes alive as classic old wedding songs are played.