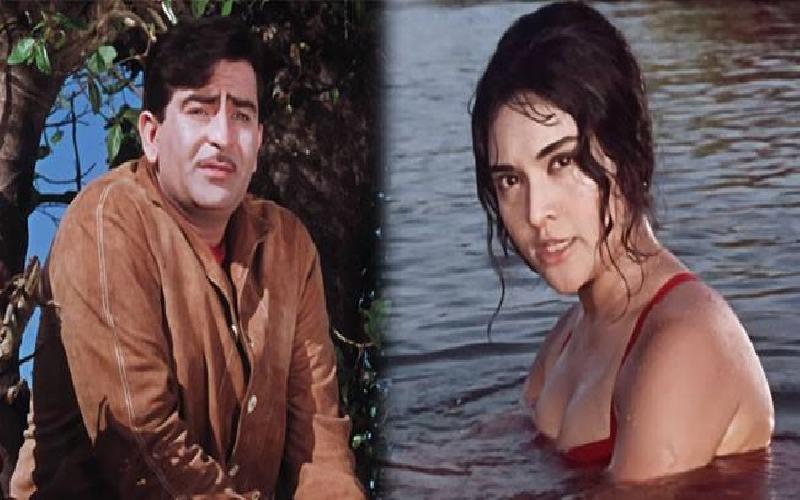 Image Source - This image has been taken from the source

In the 1950s majority of bollywood films used to be black and white. But Dilip Kumar, Raj Kapoor, Nargis, Vaijayantimala, Madhubala, whenever acted in coloured films like Aan, Mother India, Sangam, Mughal I Azam, they ended up being blockbusters.

Those Bollywood actors who came to films in 1950s, first half of their careers were restricted to black and white films. The rest of their films got coloured.

Tragedy King Dilip Kumar acted in the first Bollywood coloured film, which was Aan in 1952. Nargis, Premnath and Nimmu were the other actors and actresses of the film. Aan ended up being the biggest blockbuster film of 1952. It was directed by Mehboob Khan and music was composed by Naushad Ali.

Shammi Kapoor’s first coloured film was Junglee in 1961. It was the 2nd biggest hit film of the year after Dilip Kumar’s Ganga Jumna.

Showman Raj Kapoor’s first coloured film was Sangam in 1964. Superstars Rajender Kumar and Vaijayantimala acted in the film. The film was directed by Raj Kapoor and music was composed by Shankar Jaikishan. It was the biggest blockbuster of 1964. Sangam swept all the filmfare awards of 1964, including best actress award for Vaijayantimala, best director award for Raj Kapoor, to name a few.

Rajender Kumar’s first coloured film was Mere Mehboob in 1963. It was directed by Harnam Singh Rawail. The music of Naushad Ali flabbergasted the audience. Rafisahab’s ghazal “mere mehboob tujhe meri muhabbat ki kasam” became a super hit classic ghazal of the decade. The pair of Sadhna and Rajender Kumar mesmerized the audience. The film ended up being the biggest blockbuster of 1963.

Pradip Kumar’s first coloured film was Taj Mahal in 1963. It was directed by M Sadiq. The music was composed by Roshanlal Nagrath. Pradip Kumar and Bina Rai were unparallel in their roles of Shahjahan and Mumtaz Mahal. The songs of Rafisahab and Lataji in the film were outstanding. The film ended up being 2nd biggest blockbuster of 1963 after Mere Mehboob.

Joy Mukherjee’s first coloured film was Phir Wohi Dil Laya Hoon in 1963. It was directed by Nazir Hussain. Asha Parekh acted opposite Joy Mukherjee in the film. The music was composed by OP Nayyar. Again the songs of Rafisahab and Asha Bhosle made the audience spellbound. The film ended up being the 3rd biggest blockbuster of 1963 after Mere Mehboob and Taj Mahal.

Biswajeet’s first coloured film was April Fool in 1964. It was directed by Subodh Mukherjee. Saira Banu played the role of the heroine of the film. The music of the film was composed by Shankar Jaikishan.  The film ended up being the 9th biggest hit film of 1964.

Bharat Bhushan’s first coloured film was Jahanara in 1964. It was directed by Vinod Kumar. Music was composed by Madanmohan Kohli. Bharat Bhushan and Mala Sinha played the lead roles in the film.

By the year 1965, at least 70% of Bollywood films became coloured every year. So the films of upcoming stars of India including Dharmender, Jeetender, Manoj Kumar, Shashi Kapoor, all were coloured films.

There was huge value addition to the outdoor shooting that started taking place in the mid-1960s. Directors started stretching out from studios and shooting in beautiful locations of Jammu Kashmir, Himachal Pradesh, Ooty, Darjeeling, Nainital and other places.

All of a sudden Bollywood films were totally shot in foreign locations. Raj Kapoor’s film Around the world was shot in USA, Canada, West Indies, Hawaii Islands, Joy Mukherjee’s Love in Tokyo was shot in Japan, Shammi Kapoor’s An Evening in Paris was shot in France, Biswajeet’s Night in London was shot in England.

It was a co-incidence that majority of coloured films of eminent heroes and heroines were super hit films. For example Madhubala’s greatest hit film in her entire career was Mughal – I –Azam in 1960. It was a coloured film. It was the greatest blockbuster of Dilip Kumar as well.

Sangam was the greatest blockbuster for Showman Raj Kapoor, superstar Vaijayantimala, Jubilee Kumar Rajender Kumar in 1964. It was a coloured film.

Mother India was the greatest blockbuster for actress Nargis . It was a coloured film released in 1957.

There was serious competition in the list of actors and actresses in the 1940s. The competition increased in 1950s and in 1960s it was a very steep rivalry. In respect of actresses right from Meena Kumari to Vaijayantimala, Saira Banu to Sadhna, Wahida Rehman to Rajashree, Mumtaz to Mala Sinha, there was sheer talent and hard work that helped the actresses to be on top for more than 10 to 15 years.

In respect of actors there was a very long list, right from Raj Kapoor to Dilip Kumar, Ashok Kumar to Balraj Sahani, Pradip Kumar to Bharat Bhushan, Shammi Kapoor to Joy Mukherjee, Dev Anand to Biswajeet, Dharmender to Raj Kumar, Jeetender to Sunil Dutt, it was almost 15 actors competing for the top 10 places.

In respect of directors there was also a long list right from V Shantaram to Bimal Roy, Raj Kapoor to Shakti Shamanta, Mehboob Khan to Raj Khosla, BR Chopra to Yash Chopra. In respect of music directors there was another long list from Naushad Ali to Shankar Jaikishan, Roshanlal Nagrath to Madanmohan Kohli, SD Burman to Salil Choudhury, OP Nayyar to Chitragupt, Kalyanji Anandji to Laxmikant Pyarellal, Ravi Shankar Sharma to Khayyam. Same was the case of shayars and lyricists.

The coloured films added budget of producers and also there was value addition in terms of costumes and beautiful locations where films were shot. The viewers admired the coloured films a lot and that was the reason the films ended up with bigger business than previous years.

TAGS : Coloured films Raj Kapoor Dilip Kumar Madhubala Vaijayantimala Nargis Pradip Kumar
Let us know how you like this article. Like it and Rate it below.
694 2
0
Thanks for rating this article
0 stars - by 0 user(s)

Regarded by many the greatest playback singer in the Indian film Industry, Kishore Kumar was known for his melodic soulful voice. Here’s an epic showcase of the best Kishore Kumar songs..

Over the years Hindi films have showcased some of the most sensual and seductive songs. This space brings to life an epic list of the hottest Bollywood songs.