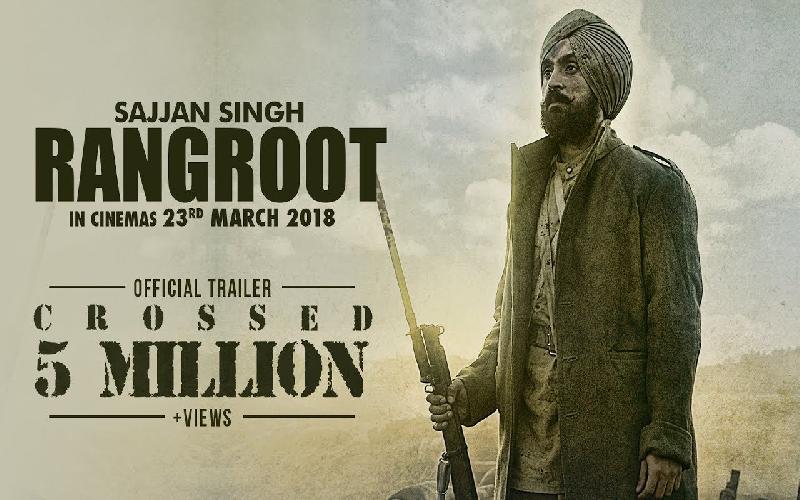 The Sikhs are hardy fighters and this film Sajjan Singh Rangroot is a paean to them. The film has done well at the box office and deserves a look in.

"Sajjan Singh Rangroot" is a film that has had a lot of hype. Its trailer on youtube garnered over 5 million hits. the film was released on 23 March 2018 simultaneously in India and Dubai. I saw the film at Abu Dhabi in the hall close to Delma Mall, the Indian quarter and I was impressed by it. The Arabs who were watching the film appeared suitably impressed.

A word about the film will be in order. The film is a song in praise of unsung Sikh soldiers who fought in the First World War in France against the Kaiser, Wilhelm II, and Germany.

It is a story of their trials and tribulations. The star is Diljit Singh Dosanjh, the Sikh actor from Punjab who does the main role. Not to be forgotten is the role of Yograj Singh who puts in a great performance as the Subedar who motivates the Sikhs to fight.

The film was released on 23 March and as per trade reports it has garnered nearly Rs 1.25 crore on an opening day and by the weekend it crossed 6 crores. Considering the film had a budget of Rs 10 crore, it is a creditable performance at the box office that the film recovered its cost up to 60% in the first 4 days of its release.

The film has appealed to the vast Sikh and Punjabi diaspora in the UK and Canada and I could see that the Arabs were also impressed with the film. The British made "Dunkirk", so it's a good idea that this film on Sikh soldiery has been made in India. Sikhs were a neglected lot under Pandit Nehru, but Modi gave all honors when he visited the Sikh soldier's cemetery in France on his visit there.

The film is doing well at the box office and all credit to the director and Diljitwho has turned in a performance of a lifetime.

TAGS : Film Sajjan Singh Rangroot Dunkirk Indian war film
Let us know how you like this article. Like it and Rate it below.
240 0
1
Thanks for rating this article
5 stars - by 1 user(s)

An early retired Gp Capt from Air Force who is an Executive Director in the Corporate world. Loves to write fiction and articles. Published over 60 short stories and his novel" Romance of the Frontier" is published from Notion Books.His second novel is on way for publication. The author also has close to 10,000 articles on the b net with millions of views